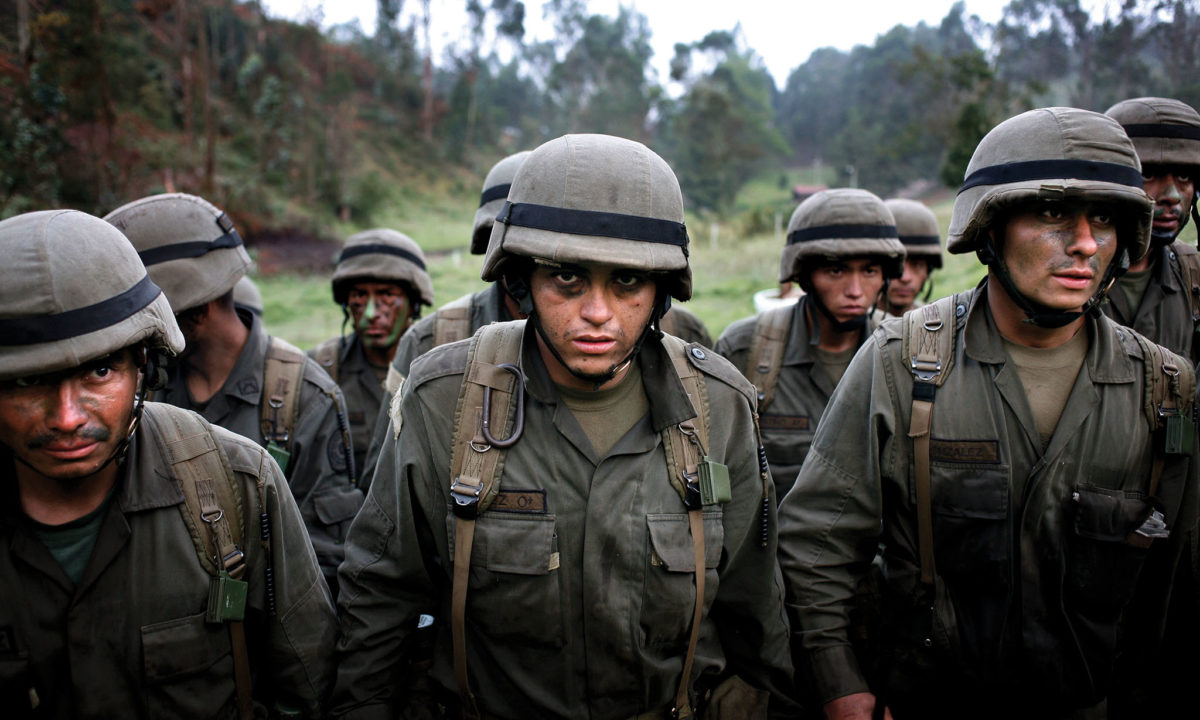 #4 Malacarne – Married to the Mob

The Godfather of Bogotá

“If you want me out of here, you’ll have to kill me. But before I die, I’ll shoot first.” Salvatore grips his gun and stares right into the eyes of three FARC guerilleros (Fuerzas Armadas Revolucionarias de Colombia – Revolutionary Armed Forces of Colombia), who stand before him, their hands shaking. The year is 1992 and Salvatore has just made a momentous discovery: the enemy is also afraid. Salvatore Mancuso Gomez is the founder of the AUC (Autodefensas Unidas de Colombia – United Self-Defence Forces of Colombia), an army of eighteen thousand far-right paramilitaries, formed in the mid-1990s in response to the burgeoning violence of the FARC. Salvatore Mancuso’s father hailed from Sapri in the Italian province of Salerno. In September 1956, he relocated to Colombia, settling in Montería in the northern province of Cordoba, where he would try his luck. Born in 1964, Salvatore was the second of his six sons. On completing his studies in farming administration, Salvatore went on to gain a Master’s Degree from the University of Pittsburgh in Pennsylvania, USA and – in 1982 already – became a national motocross champion. He also started a family and worked as a cattle-breeder in Montería. Until he decided to take up arms in order to protect himself from the FARC. An escalation from nought to a hundred: in 1995, he writes to defence minister Fernando Botero, demanding greater security for the Montería region, completely controlled by the guerilleros as they plunder, murder and extort protection money. This is his last act as a regular citizen before creating the ACCU (Autodefensas Campesinas de Córdoba y Urabá (Peasant Self-Defense Forces of Córdoba and Urabá) soon after – and the notorious AUC in 1997, made up largely of rich, well-educated sons of Colombian upper middle-class families, who have channelled their rage into an ideology. The first warrant for the arrest of Mancuso, one of 23 served on him to date, was issued in the year 1996. Both Italy and the USA have requested his extradition. Over a period of ten years, Mancuso is thought to have shifted some thirty thousand tons of cocaine and may have in excess of ten thousand deaths on his conscience. His annual turnover is approximately seven billion dollars, as he admitted himself in a hearing.

After the demise of Escobar’s Medellín Cartel and the end of the Cali Cartel thereafter, the cocaine business fell into the hands of those actually running the territory, i.e. the FARC and the AUC. Income from the drug trade was initially invested in weapons and financing armies, but in time the two fanatical groups put ideology on the back burner and focussed on cocaine as their core business. The most reliable customer of choice is the Calabrian ‘Ndrangheta: “There has been a relationship of trust between the cocaine producers and the ‘Ndrangheta for many years. It enables the Calabrians to negotiate favourable prices and delivery dates. The organizations have grown so close that the “Narcos” now just have to give their word to the Calabrians when it comes to deliveries”, says prosecutor Mario Spagnuolo, who has worked for the Catanzaro Anti-Mafia Bureau for many years.

But how did Salvatore Mancuso come by his ‘Ndrangheta connections?

Close to home. Montería is a small town in northern Colombia, situated on the banks of the River Sinú. It has a population of a mere three hundred and fifty thousand, albeit with a murder count of seventy per month. In this small, poor town, five out of ten restaurants are Italian. The Italian community lives (unobtrusively) in the wealthiest districts, mindful of tradition and staying in touch with Italy. Mancuso is a legend in Montería. Everyone on the street has a Mancuso story to tell. Like the one about tons of dollars sealed up and buried in the middle of a wood with the aid of a GPS navigation system. Or during the 2006 World Cup Finals, when Mancuso made an appearance at the Piccola Italia restaurant to support the Italian team, where the chef was the very same man who had cooked for him and his military staff during the years he spent in hiding.

Mancuso and the Montería police have a special relationship. Indeed, they are so close, that the narco-paramilitary paid for the law enforcement forces’ helicopters, which he, in turn, was able to borrow, sprayed with different paint. Although this may be an apocryphal story, drummed up to feed the myth of the “godfather”.

Mancuso gave himself up to the police in 2007 and was detained in a kind of prison hotel, built especially for him. He did so on the basis of the so-called “Justice and Peace Law”, promoted by President Alvaro Uribe Vélez, in which the AUC would be afforded remission if they turned in their weapons voluntarily. Hoping to preclude his extradition, Mancuso exerted his influence on one third of Congress, all people who were in some way connected to him, whose position he could effectively compromise. It was Mancuso’s dream to live in Italy (using his official Italian passport) and manage the fortune he had amassed in the previous decade. He hoped for freedom, but his plans were hindered by pressure from Bogotá’s greatest sponsor, the only one Uribe could not say “no” to without recourse to a mountain of dollar bills. The financier of the Colombian government is the USA. Hence Salvatore Mancuso was deported to America on 13 May, 2008.